As researchers have learned more about the gene changes in cells that cause cancer, they have been able to develop newer drugs that specifically target these changes. These targeted drugs work differently from standard chemotherapy (chemo) drugs. They often have different (and less severe) side effects.

Drugs that target the HER2/neu protein

In about 1 in 5 patients with breast cancer, the cancer cells have too much of a growth-promoting protein known as HER2/neu (or just HER2) on their surface. Breast cancers with too much of this protein tend to grow and spread more aggressively without special treatment.

A number of drugs have been developed that target this protein:

When are these drugs used

Pertuzumab can be given with trastuzumab and chemo therapy to treat advanced breast cancer. This combination is also used to treat early breast cancer before surgery.

Lapatinib is used to treat advanced breast cancer. It is most often used if the doctor thinks that trastuzumab is no longer working. 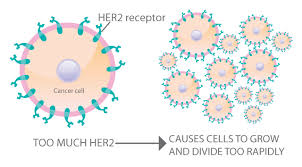 The side effects of these drugs are often mild..

Some women do develop heart damage during or after treatment with the antibody drugs (trastuzumab, pertuzumab, and ado-trastuzumab emtansine). This can lead to a problem called congestive heart failure. For most (but not all) women, this effect lasts a short time and gets better when the drug is stopped. The risk of heart problems is higher when if these drugs are given with certain chemo drugs that also can cause heart damage, such as doxorubicin (Adriamycin) and epirubicin (Ellence). Because these drugs can cause heart damage, doctors often check your heart function (with an echocardiogram or a MUGA scan) before treatment, and check it again every few months while you are taking the drug. Major symptoms of congestive heart failure are shortness of breath, leg swelling, and severe fatigue. Let your doctor know if you develop any of these symptoms.