Hormone therapy is another form of systemic therapy given mostly as tablets. It is most often used as an adjuvant therapy to help reduce the risk of the cancer coming back after surgery, but it can be used as neoadjuvant treatment, as well. It is also used to treat cancer that has come back after treatment or has spread.

A woman's ovaries are the main source of the hormone estrogen until menopause. After menopause, smaller amounts are still made in the body's fat tissue, where a hormone made by the adrenal gland is converted into estrogen. 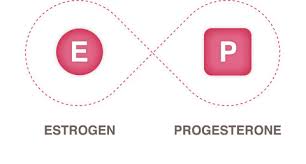 Tamoxifen: Tamoxifen blocks estrogen receptors in breast cancer cells. This stops estrogen from binding to them and telling the cells to grow and divide.
For women with hormone receptor-positive invasive breast cancer, tamoxifen can be given for 5 to 10 years after surgery to lower the chances of the cancer coming back and helping patients live longer. It also lowers the risk of a new breast cancer in the other breast. For early stage breast cancer, this drug is mainly used for women who have not yet gone through menopause. Aromatase inhibitors (discussed below) are the preferred treatment for women who have gone through menopause.

Tamoxifen can also stop the growth and even shrink tumors in women with metastatic breast cancer. It can also be used to reduce the risk of developing breast cancer in women at high risk.

This drug is taken by mouth, most often as a pill.

The most common side effects of these drugs include fatigue, hot flashes, vaginal dryness or discharge, and mood swings.
Some women with bone metastases may have a "tumor flare" with pain and swelling in the muscles and bones. This usually subsides quickly, but in some rare cases a woman may also develop a high calcium level in the blood that cannot be controlled. If this occurs, the treatment may need to be stopped for a time.

Rare, but more serious side effects are also possible. These drugs can increase the risk of developing cancers of the uterus (endometrial cancer and uterine sarcoma) in women who have gone through menopause. Tell your doctor right away about any unusual vaginal bleeding (a common symptom of both of these cancers). Most uterine bleeding is not from cancer, but this symptom always needs prompt attention.
Blood clots are another possible serious side effect. They usually form in the legs (called deep venous thrombosis or DVT), but sometimes a piece of clot may break off and end up blocking an artery in the lungs (pulmonary embolism or PE). Call your doctor or nurse right away if you develop pain, redness, or swelling in your lower leg (calf), shortness of breath, or chest pain because these can be symptoms of a DVT or PE.
Rarely, tamoxifen has been associated with strokes in post-menopausal women so tell your doctor if you have severe headaches, confusion, or trouble speaking or moving.

These drugs might also increase the risk of a heart attack.

The benefits of taking these drugs outweigh the risks for almost all women with hormone receptor-positive invasive breast cancer.

Aromatase inhibitors (AIs): Three drugs that stop estrogen production in post-menopausal women have been approved to treat both early and advanced breast cancer: letrozole (Femara), anastrozole (Arimidex), and exemestane (Aromasin). They work by blocking an enzyme (aromatase) in fat tissue that is responsible for making small amounts of estrogen in post-menopausal women. They cannot stop the ovaries from making estrogen, so they are only effective in women whose ovaries aren’t working, either due to menopause or due to treatment with luteinizing hormone-releasing hormone analogs (these are discussed later on). AIs are taken daily as pills. So far, drugs in this group seem to work equally well in treating breast cancer.
Several studies have compared these drugs to tamoxifen as adjuvant (after surgery) hormone therapy in post-menopausal women. Using these drugs, either alone or after tamoxifen, has been shown to better reduce the risk of the cancer coming back later than using just tamoxifen for 5 years. Schedules that are known to be helpful include:

Most doctors now recommend post-menopausal women whose cancers are hormone receptor–positive use an AI at some point during adjuvant therapy. Right now, standard treatment is to use these drugs for about 5 years (or alternate with tamoxifen for a total of at least 5 years). Studies now being done to see if giving an AI for more than 5 years would be more helpful.

For women with early-stage breast cancer who have not gone through menopause when they are first diagnosed, tamoxifen is often used first, and then an AI may be given later if they go through menopause during treatment. Another option is taking a drug that turns off the ovaries (a luteinizing hormone-releasing hormone analog) along with an AI.

The AIs tend to have fewer serious side effects than tamoxifen—they don't cause uterine cancers and very rarely cause blood clots. They can, however, cause muscle pain and joint stiffness and/or pain. The joint pain may be similar to a new feeling of having arthritis in many different joints at one time. This side effect may improve by switching to a different AI, but it has led some women to stop drug treatment. If this happens, most doctors recommend using tamoxifen to complete 5 years of hormone treatment.

Because aromatase inhibitors remove all estrogens from women after menopause, they also cause bone thinning, sometimes leading to osteoporosis and even fractures. Many women treated with an aromatase inhibitor are also treated with medicine to strengthen their bones, such as bisphosphonates or denosumab (these drugs are discussed in the section “Bone-directed therapy for breast cancer”).

Ovarian ablation: In pre-menopausal women, removing or shutting down the ovaries (ovarian oblation), the main source of estrogens, effectively makes the woman post-menopausal. This may allow some other hormone therapies to work better and is most often used to treat metastatic breast cancer, but has also been studied in patients with early-stage disease.
Permanent ovarian ablation can be done by surgically removing the ovaries. This operation is called an oophorectomy. More often, ovarian ablation is done with drugs called luteinizing hormone-releasing hormone (LHRH) analogs, such as goserelin (Zoladex®) or leuprolide (Lupron®). These drugs stop the signal that the body sends to ovaries to make estrogens. They can be used alone or with other hormone drugs (tamoxifen, aromatase inhibitors, fulvestrant) as hormone therapy in pre-menopausal women.
Chemotherapy drugs may also damage the ovaries of pre-menopausal women so they no longer produce estrogen. In some women, ovarian function returns months or years later, but in others, the damage to the ovaries is permanent and leads to menopause. This can sometimes be a helpful (if unintended) consequence of chemotherapy with regard to breast cancer treatment, although it leaves the woman infertile.

All of these methods can cause a woman to have symptoms of menopause, including hot flashes, night sweats, vaginal dryness, and mood swings.